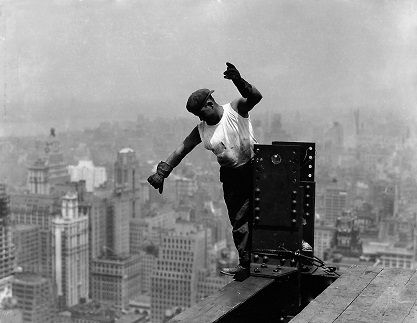 Every day from 10 am to 6 pm, closed on Tuesday

The exhibition brings together for the first time original works from the Rosenblum family collection of New York, the largest archive collection of vintage Hine prints in private hands.

Through a nucleus of 60 vintage prints his most well known cycles are presented here: from the famous Empire State Building workers to the Ellis Island immigrants, from the Pittsburgh reportage to child labour in Pennsylvania, North Carolina and Virginia. The public will thus be able to admire the mastery and humanity of the father of social photography and link to his experience some of the highest values of the subsequent generation, represented for example by the Photo League.

Perhaps you are tired of pictures of child labour. Well, so are we all, said Hine. But we aim to make you and the whole country so uncomfortable before this question that when the time comes for action, the pictures of child labour will be no more than testimony of the past. Historians agree in thinking that Hine’s work played a decisive role in the debate on the American National Child Labor Law. In 1932 his first book entitled Men at Work was published to immediate, extraordinary success. Charlie Chaplin’s Modern Times dates from 1936 and, while we may laugh at the worker who has become a cog in the immense machines, we cannot but think of Hine’s famous photo of 1920 showing a mechanic with a micrometre measuring the transmission shaft he is making.

The exhibition by Admira, Milan, is being produced and organised by Civita Tre Venezie and will be accompanied by the Admira Edizioni catalogue with essays by Mario Calabresi and Nicolò Leotta, for which we would like to thank especially the Cultural Centre of Milan.

One of the high points will be the screening of the film America and Lewis Hine [60’], by Nina Rosenblum and Daniel Allentuck of Daedalus Production.